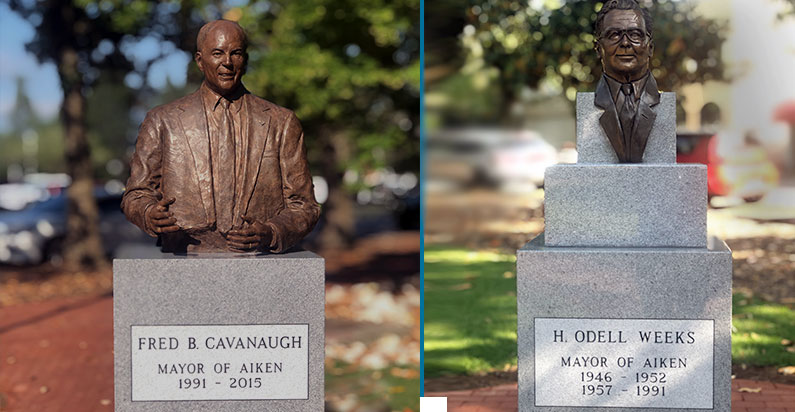 “Vision and Character” now reside in Park Avenue’s Teague Park, downtown Aiken. Over the weekend the unveiling of two new permanent monuments, Mayor Odell Weeks and Mayor Frederick B. Cavanaugh exemplifying their many contributions to Aiken.

On Saturday, May 18, the sculpture honoring Mayor Odell Weeks, who was an advocate for harmony and teamwork regardless of political views, and was considered a visionary, was unveiled to family members after being relocated from Richland Avenue to Teague Park. Mayor Weeks served Aiken as Mayor from 1946 to 1952 and again from 1957 to 1991. Thus far, Week’s term as mayor is the longest in Aiken’s history.

On Sunday, May 19, a private ceremony was held in the park, commemorating the unveiling of a life-sized bronze statue of former City of Aiken Mayor Frederick B. Cavanaugh which was funded by private donations and created by well-known South Carolina sculptor Maria Kirby-Smith of Camden.

Cavanaugh was first elected to the Aiken City Council in November 1985 and was appointed mayor pro tempore two years later. He was elected mayor in 1991 and served for 24 years, retiring in 2015.

Under his leadership, the City of Aiken mounted substantial efforts to preserve historic buildings and natural amenities, developing a vibrant downtown through revitalization and fostering one of the state’s best recreation programs.